What Is Series C Funding?

A Series C funding round is mainly used to make a start-up more appealing for acquisition or to support its IPO. This is the first of a series of investments known as “later-stage.” This can continue into Series D, Series E, Series F, Series G, and private equity fundraising rounds, among others. Even though there is a lot of money available, many firms rarely make it to Series C. Because Series C investors are seeking for companies that have already demonstrated significant traction, this is the issue. As a result, the size of this funding stage rounds has continued to rise. 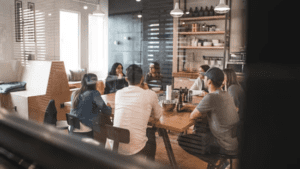 Generally, a company’s external equity fundraising will come to an end with Series C. Some businesses, however, can advance to the Series D and even Series E rounds of capital. Companies that receive hundreds of millions of dollars in capital through Series C rounds, on the other hand, are often expected to expand globally. Many of these companies leverage fundraising to enhance their valuation in the run-up to an IPO.

The average Series C funding round was $59 million in June 2020, according to a review of 14 Series C deals in the United States; the median was $52.5 million.

Pleo, a Danish B2B fintech that provides a simplified spending management application and smart corporate cards, raised €126.5 million in a Series C round. This is the largest Series C round in Danish history, as well as one of the largest in European fintech, giving the company a Unicorn valuation of almost €1.4 billion.

Pleo’s Series C investment comes two years after the company raised roughly €50 million in a Series B round led by Stripes, which was previously the largest Series B amount raised in Denmark. Pleo had secured a Series A funding in 2018, which helped the company grow its product across Europe. Pleo now has operations in six countries: Denmark, the United Kingdom, Ireland, Spain, Germany, and Sweden. 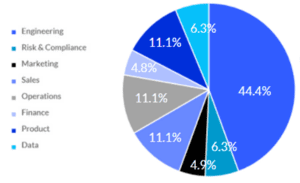 The average headcount of a Payments company at Series A is 363 employees.

At this point of funding, it is projected to have a larger finance division. The engineering department continues to employ a sizable number of people. The department breakdown is similar to that of Series B but with an almost 50% headcount growth.

As the personnel and funds increase, instead of focusing on individual areas, you should be increasing the total headcount. The core divisions are in place, but will expand due to lack of specific expertise, new locations, or increased workload.

At Series C, all of the C-Suite positions should be filled as the company has most likely reached a high valuation. It would be more economical and efficient to internally perform all processes and stop outsourcing particular aspects of the business.