Team Sizes At The Series A Funding Stage

What Is Series A Funding?

Receiving a Series A round of funding is a significant milestone for a start-up. Aside from the fact that the money is considerably larger than a seed round, companies must demonstrate that they have a minimum viable product (MVP) – not just a clever idea or team – in order to receive an A round. It is difficult for seed-stage enterprises to advance to a Series A round of funding.

In fact, only about 10% of companies that raise a seed round go on to raise a Series A round of funding. In exchange for funding, venture investors receive the first series of preferred shares after the common stock issued at the seed round with a Series A investment. A Series A financing, on average, offers a firm with up to two years of runway to build its products, staff, and begin executing on its go-to-market strategies. 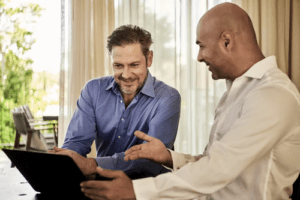 Characteristics of Series A funding for FinTech

Average Series A Funding Amount in 2021 (based on funding data from the US): As of November 29, 2021, the average Series A investment round has increased throughout the years and is now around $21.8 million. In terms of the number of transactions and total investment, venture capital investment has held consistent in 2021. For example, there were at least 22 Series A deals in the week ending September 25th, 2021, totalling about half a billion dollars in venture capital.

The mean Series A is much greater than the median Series A, which is worth noticing. The typical early-stage financing, which includes Series A, is expected to be $8 million in 2021. Because of the growing number of “mega-rounds,” notably among biotech start-ups, there is a substantial gap between the mean and median.

Average Series A Start-up Valuation in 2021: Series A start-ups currently have a median pre-money valuation of around $24 million.

Examples Of FinTech Series A Funding

One of the greatest examples relates to CredAvenue raising $90 million in India’s biggest Series A funding round. CredAvenue operates a platform that connects corporates seeking loans with financial institutions and other investors who can facilitate such debt offerings through various instruments. The fintech start-up will use the funds to expand its product suite and ramp up its technology and data science infrastructure.

Team Sizes at Series A Funding Stage By Subsector 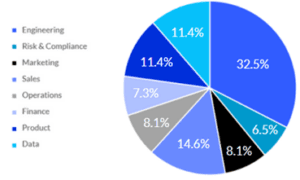 The average headcount of a Payments company at Series A is 74 employees.

At Series A the team compositions start to shift. More budget is given to functions where headcount is needed, such as Sales, Compliance and Data, giving non-engineering functions a more even split.

With an average headcount of 74 at Series A stage, we often find that Data roles are merged with Engineering teams rather than given a department of their own.