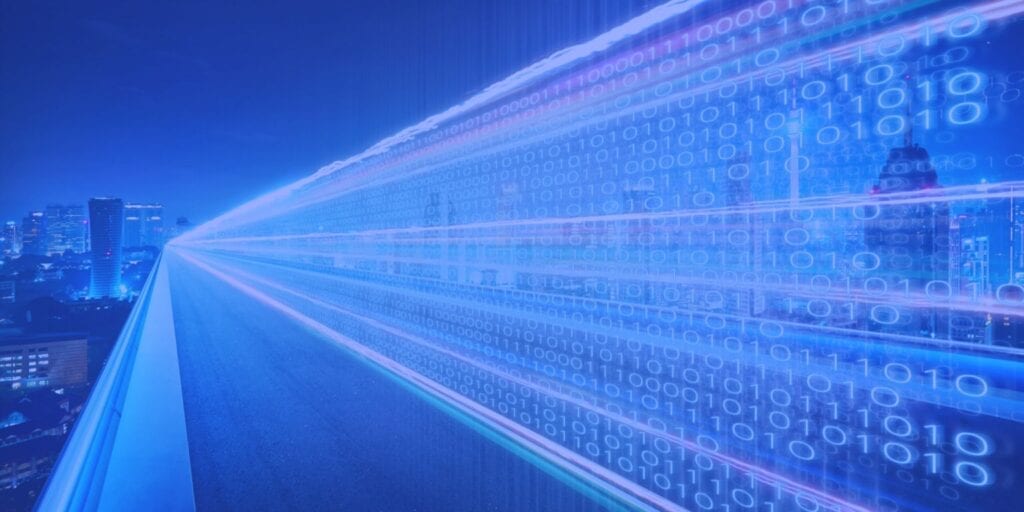 Team Sizes At The Series B Funding Stage

What Is Series B Funding? 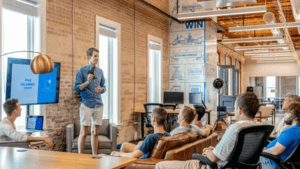 Typically, before a Series B fundraising round, the company must have demonstrated significant progress following its Series A round. With a larger funding round in Series B, the company will be able to accelerate its growth. Quality talent acquisition is necessary for developing a winning product and building a team. Incorporating business development, sales, advertising, technology, support, and staff to a company’s budget requires substantial capital.

Characteristics of Series B funding for FinTech

In terms of the process and important participants, Series B appears to be comparable to Series A. Many of the same players from the previous round generally lead Series B, including a major core investor who helps to attract other investors. The distinction between Series A and Series B is the addition of a new surge of later-stage venture capital firms.

Amount of Series B funding on average: According to an examination of 38 Series B deals completed in June 2020, the average in the United States was $33 million, with a median of $26 million.

Examples Of FinTech Series B Funding

British payments start-up Checkout.com tripled its valuation to $5.5bn after closing its Series B funding round at $150m in June. The company benefited from a surge in demand caused by coronavirus lockdowns, with transaction volumes increasing by 250 percent year over year in May.

Thousands of retailers, including Deliveroo, utilise the service to handle online payments, connecting them with card providers such as Visa and Mastercard. It claims to be the fastest provider of more than 150 different currencies.

Team Sizes At Series B Funding Stage By Subsector 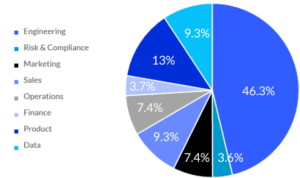 The average headcount of a Payments company at Series B is 243 employees.

There is an exponential increase in the engineering team at this stage. Engineers make up almost 50% of the workforce. Despite the % of other teams seemingly going down, headcounts for each team will have grown on average by 21 people.

Aside from the Engineering team, the Product team will have scaled significantly as new products are launched in new markets.

At this stage, most of the C-Suite positions have been filled but it is unlikely that they would have a Chief Data Officer unless the company is data driven.

An example of a company without a CDO is Flutterwave, who do not have a CDO but have many junior data positions in the company. A CMO and CRO (Risk) are also often brought on at this point to grow these teams and drive strategic vision.

As you have now gone from being a potential acquisition target to a potential acquirer yourself, you might also consider strategic buyouts or several talent acquisitions. This is also an incredibly demanding funding stage. As rounds go from $50m to way beyond, you should expect gruelling and long due diligence processes with a lot of parties involved. 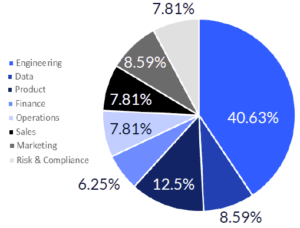 The average headcount of a Blockchain company at Series B is 170 employees.

Engineers make up almost 50% of the workforce. Despite the % of other teams seemingly going down, headcounts for each team will have grown on average by 21 people from the previous round. Aside from the Engineering team, the Product team will have scaled significantly as new products are launched in new markets.

InsurTech During the Series B Funding Stage 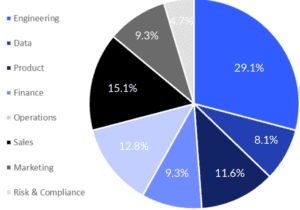 The average headcount of an InsurTech company at Series B is 99 employees.

We begin to see an exponential increase in the engineering team at this stage, making 30% of the workforce. Other teams have also grown by 27 people. Showing that the Series B funding stage is a foundational step for optimal growth. The operations team also significantly scales as team sizes grow bigger to accommodate for the growth of the business.